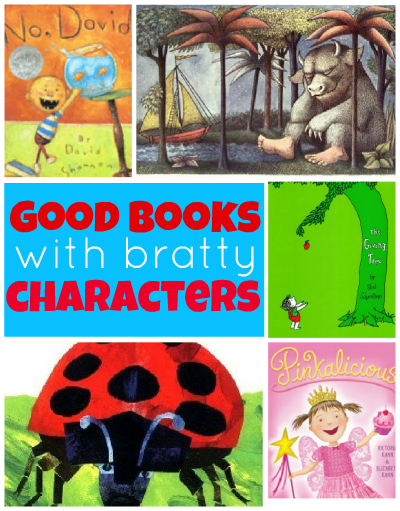 I don’t get a lot of negative comments but the ones I do hear over and over are about bratty characters in books and how parents do not want their kids exposed to them. Yesterday I had a thought provoking  reader comment on my 75 Books That Build Character post saying that kids can’t only learn how to be, they need to also learn how not to be. I couldn’t agree more. I love books with “bratty” characters because young readers recognize the bad behavior and even if they giggle at it they know it’s wrong . These books all offer great opportunities to talk and teach your children about right, wrong and appropriate behavior. 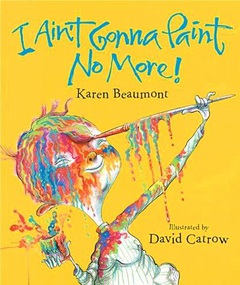 I Ain’t Gonna Paint No More!

by Karen Beaumont is guaranteed to entertain your child, even my toddler was laughing and anticipating the rhyming text which tickled me to no end! Now I have had some parents in the past not be happy about the use of “ain’t” and the little boy in the story painting everywhere, I would counter that by saying people do use “ain’t” and kids do paint on things they aren’t supposed to you can use this as an example of what you aren’t supposed to do, and ask your child what they think should happen if they painted all over the house? As far as using “ain’t” I would play the traditional “It ain’t gonna rain no more” and explain that the author used that song as inspiration for the book. 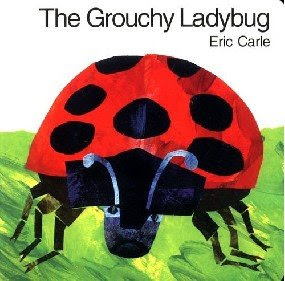 by Eric Carle is more than a cute book about a crabby bug. The Lady bug is looking for a fight and each hour she finds a bigger and bigger animal to fight with until she is unintentionally slapped by a big whale’s tail! I loved using this book to teach telling time, as there is a picture of an analog clock on each page. I would use a play clock and as I read each page ask one child to come and set our classroom clock. Also, don’t be put off by the fact that the lady bug tries to pick fights, no animal takes her up on her offer and you can spin that into a great lesson about not giving into people who are trying to pick fights. 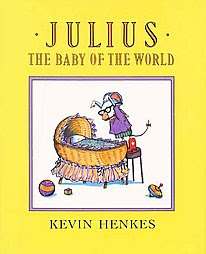 .Julius, the Baby of the World

by Kevin Henkes is such a funny book that I actually called my mom the day I bought it to read it to her over the phone. The book is about Lily who is adjusting to her new role as a big sister. The thing is Lily isn’t adjusting well, and it’s hilarious because it’s so true! So often books depict older siblings happily welcoming babies into their lives and that just isn’t always the case. Lily is not happy, she unlike her parents do not think this baby is special and she is openly hostile to Julius. I laugh out loud every time I read this book, I particularly love when Lily tells a passing pregnant mouse that she will regret being pregnant. I think this book opens the floor for a real talk about feelings when a new baby comes, it’s important to remember just because the big people are excited doesn’t mean the little ones are too! 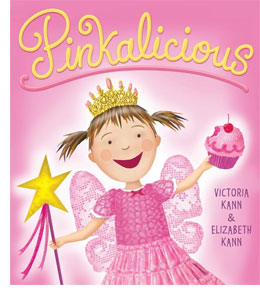 by Victoria and Elizabeth Kann. I was initially told about this book and its authors by another mom whose son loves this book. So don’t think that just because the cover looks rather feminine that your boys won’t love this book too! The little girl eats far too many pink cupcakes and before she knows it she has turned pink. To return to her normal self she needs to eat her vegetables. I like this book, and can see why kids do too. I don’t think that all characters can be perfectly pious, meek and mild but I do understand when parents are leery of introducing characters that they see as disobedient to their kids. Seeing other children behave in ways that are not allowed at their house is a fantastic lesson for readers. It opens a dialog with you and your child. 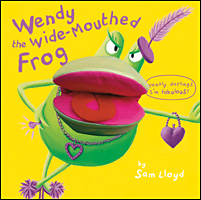 by Sam Lloyd Like it or not, our kids will probably encounter someone who thinks they are better than anyone else (or they may go through a stage of this themselves). Wendy is a frog who thinks just that and criticises the other animals in the wild for not being as great as she is. That is, until she meets a squid. At first I thought, with Wendy poking fun of other animals, that the book was somewhat negative in nature. Although Wendy isn’t nice and does change her tune at the end (though doesn’t apologize to others for her behavior), the book does open up an opportunity to discuss how negative comments can make our friends feel bad. Wendy herself is a hand puppet that mom can use to bring Wendy to life but the kids will love the squid page where they too can stick their hand in to be the squid’s tentacles. This moves kids from being passive listeners to interacting with the book too. ( reviewed by contributing writer Carrie Anne) 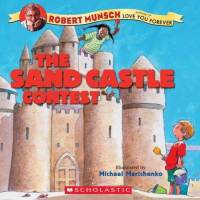 The Sandcastle Contest by Robert Munsch. I gave this book a really bad review last year. While it still isn’t my favorite Munsch book, I am taking back some of what I said. My son grabbed it the other day and after reading it with him ( last year it was over his head) I can honestly say I have had a change of heart. The tantrum the main character has when no one believes him about really making everything from sand was a good teaching tool for my 2.5 year old. We stopped and talked about anger, and deep breaths, and wrecking things when we are mad. I think this book could be a good way for parents to talk about anger and frustration without feeling like you are giving a lecture. 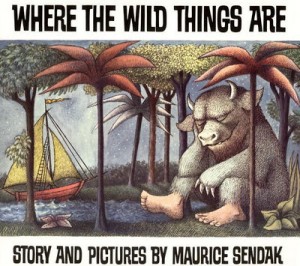 Where the Wild Things Are

by Maurice Sendak probably doesn’t need an introduction especially with the current film adaptation. We read this book often and my son randomly quotes the book throughout the day. Telling me to “Be still” just like Max tells the Wild Things. If by chance you are not familiar with this book, it’s a story of a little boy Max who is sent to his room for being wild and his imagination turns it into another world, filled with Wild Things and freedom from rules for behavior. Ultimately though Max’s heart pulls him back home where he is loved most of all, even when he’s wild. 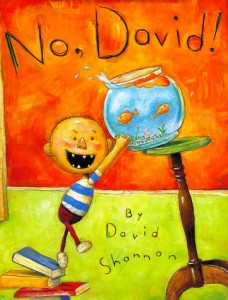 by David Shannon is probably the author’s best known book, in it we follow the misadventures of little David and his eventual disciplining and hug from his mom. This book is a wonderful icebreaker for talking about rules with a class.  I have successfully used it with many groups of kids and my own as a reminder about rules and why we have them. Kids love watching other kids do naughty things ( and are quick to remind each other of the right way to do things) so this book is always a hit with toddlers on up. 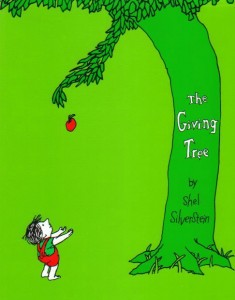 The Giving Tree  by Shel Silverstein. I have been asked so many times why I haven’t ever reviewed this book. When I wrote the 75 Books that build character post I admitted I’d never read it to my kids. I couldn’t remember why but I knew I didn’t like the book. I love the author and read his poetry to my class while teaching and my own kids often. So I took it out of the library , read it to my son and remembered I hate this book. It makes me incredibly sad. I don’t like how horrid the boy is to the tree, how spineless the tree is and I never saw it as a lesson in giving like so many do but a lesson in taking . I read it to my son and we talked, we had a great talk about taking advantage of those who love us, and how it hurts everyone. When a comment was left yesterday suggesting I don’t think books like this are useful I had to include the book in today’s post.  Yes this book is useful, without a doubt and it should have been included in previous posts.  I know many of you probably love it , it just makes me so sad I will read it one more time to my daughter when she is older, we’ll have a talk about it but it’s never going to have a permanent spot on my shelf. 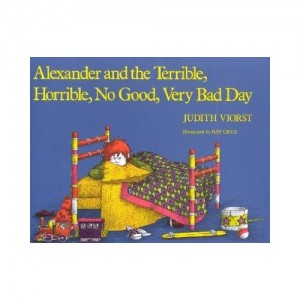 Alexander and the Terrible, Horrible, No Good, Very Bad Day

by Judith Viorst was another childhood favorite that I have enjoyed sharing with my own son. This book is beautiful, even though it may take a few reads to see it’s not a story about a whining little boy so much a lesson that sometimes things do not go our way. Days can suck. It’s just the way it is. As a child I related to Alexander’s feelings of frustration and things being unfair. How often to you hear a child say “No Fair!” probably a lot. This book taps into that feeling, being little is hard but just because you are mad, or your day was bad doesn’t mean you get your way. Great book to talk about anger and frustration with your child, and it’s funny too! 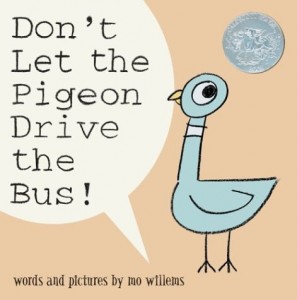 by Mo Willems might not need much of a review as I don’t know many parents who haven’t laughed along with their kids reading this book. But if you have never read this book let me tell you about it and why so many of us think it’s hilarious. The book opens with a bus driver asking readers to do him a favor and not let the pigeon drive the bus, easy right? Well just like my 5 year old son who is practicing for the negotiator of the year award this pigeon is relentless.  When I asked my son what his favorite part of the book was he giggled loudly while telling me that he loves the tantrum the pigeon has. Kids love seeing characters in books display the behavior that they want to do but only let slip through the cracks every now and then. I love when great underlying connections to kids come in such a goofy package. Love this book.

What book with a less than well behaved characters do your kids love? 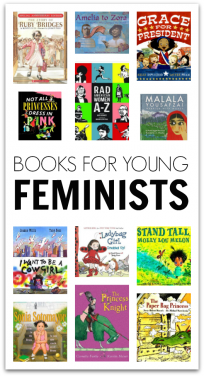 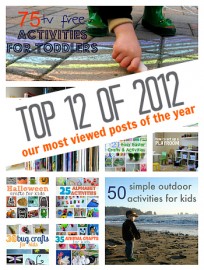