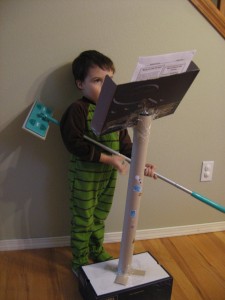 I know this isn’t going to be the most popular post we have ever posted, but my son is into music. He is also into music stands and every where we go he finds one. At restaurants the “Please wait to be seated” sign is one, at parks the little signs that tell you about the plants become ones and on the airplane his tray table became one too. So it shouldn’t have been such a shock when he said he wanted to make one for a project. Well I never say no to a challenge! 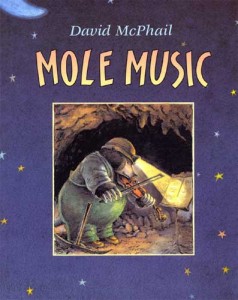 by David McPhail is a beautiful book about the power of music, trying hard and not giving up on your dreams.  The story is about a mole who sees a violin on TV one day and decides to get his own and play. He is terrible at first but sticks with it. His music becomes beautiful, and over the years he thinks only he can hear and enjoy it. In reality his music is nourishing a grand tree above the ground that serves roles in great things including as a mediator in a battle where both sides end up coming to a peaceful agreement instead of warfare. Now yes I think that one little mole’s music ending a war is a rather large statement but if you break it down, music and the arts are vital and do transform people’s lives the way they transformed Mole’s.  My favorite part is in one illustration Mole is playing anf in another tunnel you can see his old TV discarded and tipped over, I like that message.

by Robin Mitchell and Judith Steedman  is a great book about finding sounds all around and making music with anything and everything you find. Sunny hears music from the animals around town, the vehicles and of course his friends playing at the playground.  My son loved when they had a “Hootenanny” and everyone together makes music in their own way. This book reminded me of the broadway show “Stomp” from the 90s, and is a great lesson for kids about how accessible making music really is. 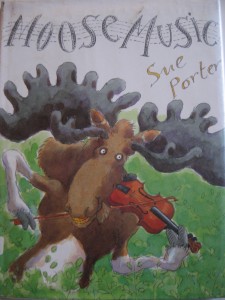 by Sue Porter is a goofy book about how what might sound like a racket to you, may indeed be music to other ears. Moose finds a violin in the mid and picks it up, and plays it. The sound is not music to the animals and people in the forrest. They get angry, they threaten to chase him, and he doesn’t stick around. He doesn’t stop playing thoughm he plays with all his heart and finally someone appreciates it. A lady moose , as you may have guessed it they fall in love and live happily ever after. My son thought this book was hilarious . It’s a cute lesson about following your heart even in the face of adversity. 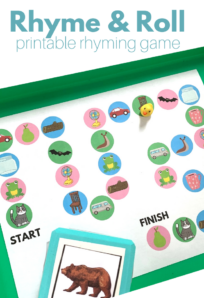 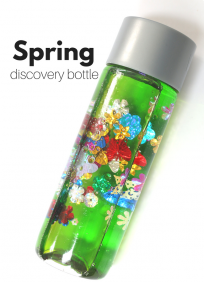 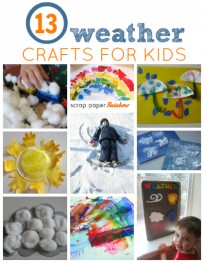