I got the inspiration for this activity from Disney’s Family Fun magazine June/July 2012 issue. The idea they shared in the magazine was to cover shower caps with shaving cream and toss cheese puffs at each other to see how many puffs you could get to stick. I quickly saw potential for this to turn into some fun learning.

Grab some cardboard, shaving cream, post-it notes, a marker, and some cheeseballs. We are about to get cheesy. 🙂 Yes, I know how dorky how I am.

I drew numbers on some post-it notes and affixed them to the cardboard for my preschooler. You could write directly on the cardboard, but this way I could easily change the numbers to allow a wider spectrum for practice.

I then wrote some math equations for my five year old son on post-it notes and affixed those to a different piece of cardboard.

Add some shaving cream. We had fun spreading it around, but you don’t have to spread it. We just couldn’t resist.

My son read the equations and figured them out.

He threw the corresponding number of cheeseballs at the targets that equaled the answer.

My three year old starting throwing the number of cheeseballs at the corresponding numbers written above the targets.

Littlest sister couldn’t resist how much fun everyone was having and had to join in. She helped count as we threw and then did some throwing herself when it was her turn.

There you have it, fun math! It combines throwing, aiming, math equations, number recognition, counting, and even sensory fun by spreading the shaving cream. We had a blast!

Kim is a contributing writer for No Time For Flash Cards, a mom to a toddler, a preschooler, and a foster parent, too. She juggles her day by trying out fun activities and crafts with the kids. After all, she is just a big kid herself. See what she has been up to over at Mom Tried It.
Like this post? Share it with a friend! 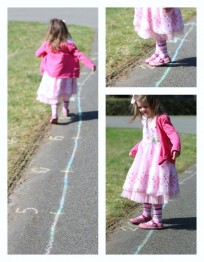 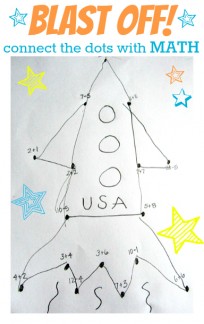 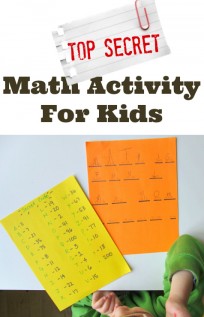