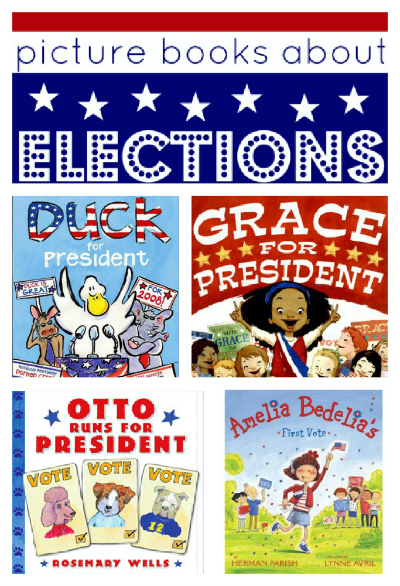 Explaining how a president is elected to a young and curious child is not an easy task even if you don’t get into what the Electoral College is. Picture books are great tools for breaking down the basics and explaining a very adult event into something children can understand and take ownership of. I think it’s so important to start teaching children about government at an early age and hope they stay engaged when they are old enough to vote. These picture books about elections were all helpful ice breakers to discuss what is going on right now on the news and who mom and dad are talking about with my son. 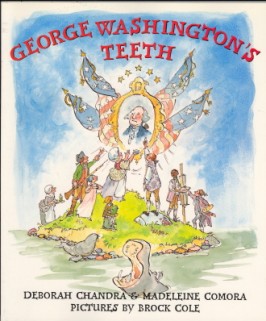 by Deborah Chandra and Madeline Comora is a funny telling of how George Washington got those famous false teeth. What I like so much about this book and what my son did too is it also tells the story of the Revolutionary War. I think the brilliant thing about this book is it shows that George Washington wasn’t the super hero that he is often portrayed as. This makes him , his story and American history in general way more accessible to young kids. I can’t ignore the really fantastic tertiary lesson about dental hygiene as well. 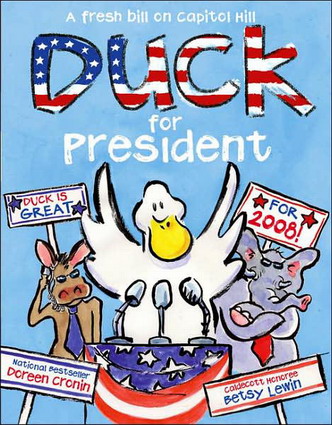 by Doreen Cronin is probably the first book most teachers will mention when you ask for a picture book about elections. It’s a great book about a duck who overthrows his farmer and ends up moving up in politics until he is elected President. With each step on the political ladder Duck realizes that he doesn’t like the job and wants something better only to discover that with each move up the workload increases too. I love that that teaches readers that being a leader isn’t about being the bossy one but rather having the most responsibility . My son got that immediately and it opened a good dialog about what he thought being President really is like.I also love the book because there is a good dose of humor that only the adults will appreciate. 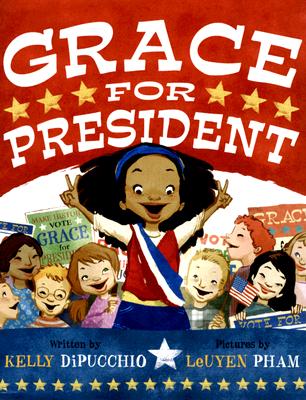 by Kelly DiPucchio is fantastic. The very best part of this book is on the first page when the main character a little girl named Grace exclaims ” Where are the girls?” in response to her teacher hanging up a poster of all the presidents. If I wasn’t in a tent in the backyard while reading this with my son I would have stood up and given Grace a standing ovation. I can’t wait to read this to my daughter in a few years. I love how shocked she is and I was really happy that my son was surprised as well.  Grace decides to run for president in the mock election for her grade at school and be the change. My love for this book doesn’t end with the wonderful example of basic feminism because next up the author tackles something oh so tricky; The Electoral College.  The author does a great job explaining what can be a very confusing system used for American presidential elections and I bet more than a few parents reading this to their kids will get something out of it too.  The story of Grace and her own campaign is sweet as well but the brilliance of this story are the complex lessons broken down so well for a young audience. 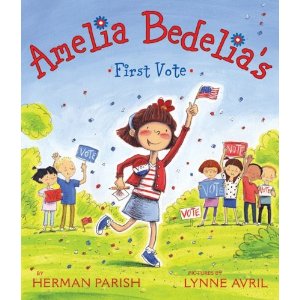 by Herman Parish wasn’t my favorite book about elections but my son really liked it. Amelia Bedelia is smaller and younger in this picture book than the easy reader books you may know her from but still taking everything literally which kids just love. The story is a simple one about a class that gets to establish a new school rule but first they must decide on a new rule.  Amelia Bedelia’s teacher takes suggestions from the class and then the next day they vote but it’s a tie!  My favorite part of the book is when a child who is home sick sends in an absentee vote via a phone call and in the end the children decide to have homework free Wednesdays. 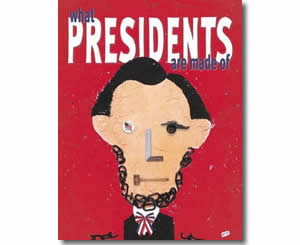 What Presidents Are Made Of

by Hanoch Piven is a simple book that brings together a collection of presidential anecdotes that will probably make you laugh more than your kids but trust me they’ll still enjoy it. It humanizes iconic figures we know and makes readers curious to learn even more about these great men. The collage style illustrations are fun and quite funny as well. 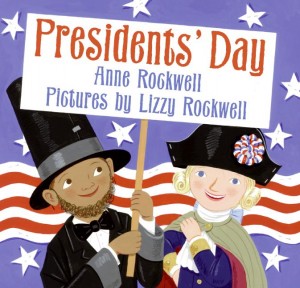 by Anne Rockwell is a perfect introduction to presidents, some of their major accomplishments, and some major points in American history. The story follows a class putting on a play and we learn about some of the most significant presidents as the children do. Even if President’s Day is months away you can use this book while learning about money, linking the various presidents on coins and bills, or for Independence day too!  Very cute and age-appropriate for older preschoolers. 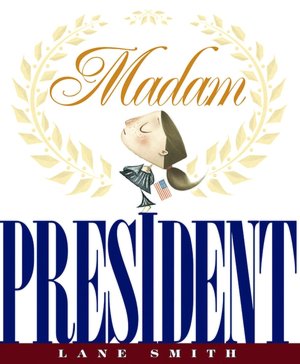 by Lane Smith is a sweet story about a little girl who equates her life and daily routine with that of the President. My favorite part of the book was when it’s explained that a president must choose a cabinet and her’s is comprised of some real positions like Secretary of State and Secretary of Defense and some not like Secretary of Fantasy and Secretary of Pizza. While reading it with my son I had him guess real or not. The book also introduced my 5-year-old to the word veto which was fun for about 2 minutes. He’s since learned in our family I am the one with veto power. I really like this book because it breaks down what the President does into the daily life of a child and the best way to get kids interested in something is to make them relate to it. 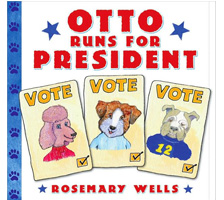 by Rosemary Wells is a story I think most any adult can relate to in one way or another. It’s the story of a school election that is less about the issues and more about popularity and fancy campaigns. That is until Otto decides to run. The message is very clear that elections should not be about being popular or buying votes with favors but about listening to your voters and trying to make the word ( or school) a better place. That is what Otto does and unlike many of the school elections I voted in popularity doesn’t win out. 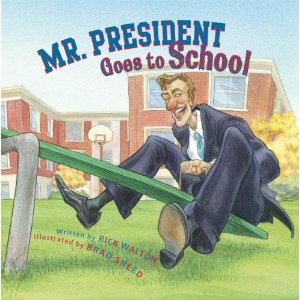 by Rick Walton is such a cute book that we really enjoyed. The book is not so much about school as it is about how complicated adult problems can get and you can imagine how big they get for the President of The United States. First of all, I have to say I loved that when we started reading it my son said: “The President should be African American .” I love that my son has no idea that there was a time when people didn’t think that could or should happen. Ok, proud moment aside the story follows Mr. President as he escapes his duties trying to make peace between Eastern European leaders and heads back to his old kindergarten class to remember what it’s all about. Of course, he ends up going back and using all the things he learned in kindergarten to make peace between the two leaders, I mean who can start a war with someone they’ve done the hokey pokey with? I like the message and the book is cute and can be a great tool to show kids how lucky they are they get to go to kindergarten, even the President wishes he could go back! 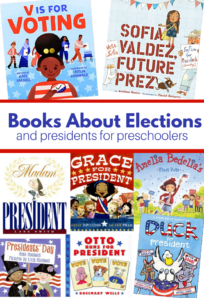 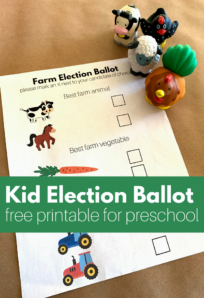