Music is so much more than entertainment. The connection between music lessons and better performance on IQ tests has been accepted for a long time in the education world. My focus is not solely on boosting my kids IQ by 7 points. But to offer them rich and diverse experiences with hopes that something will strike their fancy and turn into a passion or pastime. Learning to play an instrument takes dedication. For me, that alone is a wonderful takeaway. Books about music for kids are a great place to start exploring different instruments with very young kids from the comfort of your own home. If you live in an area with a symphony check to see when they might have child-friendly performances and workshops to see the instruments in action.

Here are 15 books about music for kids to check out at your house. The book title will take you to Amazon.com via an affiliate link. 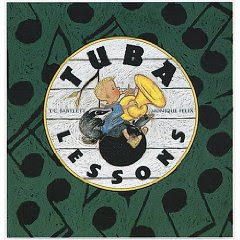 by T.C. Bartlett is a book about a little boy walking to his tuba lesson and all the things he encounters along the way. The book has very limited text but tells a sweet story perfectly without it. Younger children will need a parent to help spark the story with questions about what’s happening. But even my 2-year-old clued into the music notes getting bigger when there was a louder sound and smaller when it was quiet. Grab it and see what I am talking about. 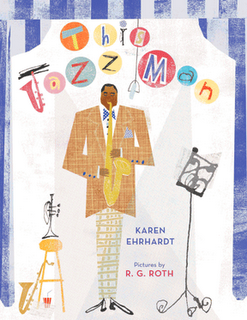 by Karen Ehrhardt is my new favorite book. The book updates the classic children’s song “This Old Man” and inserts all different men in a jazz band. However, at the end of the book, it explains that each jazz man is actually a real person including Louis Armstrong, Dizzy Gillespie, and more! I love the bios at the end of the book because I want to learn more about jazz too. OK back to the book! The book itself is a counting book, and my son eats it up. He loves calling out the number and instrument as I read the rhyme. I’ve read it to him countless times today and I haven’t minded one bit. The pictures by R.G. Roth are adorable, and all in all, I just love this book! 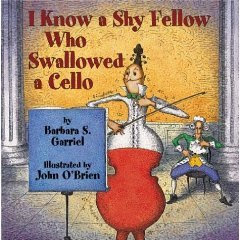 I Know a Shy Fellow Who Swallowed a Cello

by Barbara S. Garriel was an instant favorite with my son. The text is a reworked version of “An Old Lady Who Swallowed A Fly”. But this guy has a hankering for musical instruments. My son giggled through the book and was very adamant that no one could swallow a harp! But this fellow did! I liked this book because it’s a fun and absurd, as well as educational. If your wee one is as into instruments as mine, you have to read this book.

by Ann Hayes is a good resource for teaching about musical instruments. The book goes through many instruments found in an orchestra with a sizable description for each. Animals are used for the musicians and my son thought that was funny and actually learned a bit about them as well. It was really too long for us to sit and read cover to cover but it’s easy to break up and read one or two instruments at a time if it’s too much for your child in one sitting. Also, there is some figurative language that young kids will not get at all. Helpful for teaching but I don’t expect it to become a favorite to snuggle up with.

Edited: This has been the bedtime book of choice for over two weeks now, I take back my comment about it not being one to snuggle up with!

by Rachel Isadora is a simple but profound book about one little boy’s dreams. Ben loves jazz and his favorite instrument is the trumpet.  He spends much time alone playing his imaginary trumpet and listening at the door of a local jazz club. When other kids make fun of his imaginary trumpet he stops playing, that is until the trumpeter himself steps in. I like this book! And as a mom of a little boy who plays an imaginary trumpet often? I love that it gave him something to relate to and confirm that dreaming and imagining is good for the soul. 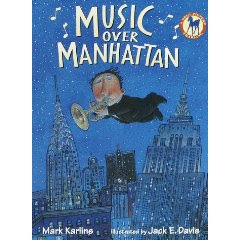 by Mark Karlins was longer than I expected but when I read it to my very overtired, no nap today 2-year-old he happily listened and pointed out the instruments, and sky scrapers. The story is about a little boy who is overshadowed by his high-achieving and nauseating cousin. A musician uncle plants the love of music in him and he strives to become as good as his uncle who floats in the air when he plays. Something I loved about this book was that the little boy works very hard. He practices all the time and slowly gets better. He had the talent to start with but still had to work hard to achieve his goal. A great lesson for all children. 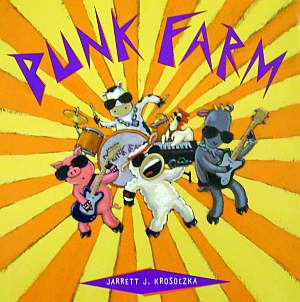 by Jarrett J. Krosoczka. As much as I wanted to love this book, I felt it was just meh. I like the idea the author was going for very much. Some of the details were hilarious like the horse acting as a bouncer for the punk show. But the meat of the book just didn’t do it for me. Most of the book is a variation of Old MacDonald with different instrument sounds and by the second animal I was so over singing this song, maybe I just don’t like that song  – I have been teased with it most of my life.  My kids liked the book and we all loved the illustrations. 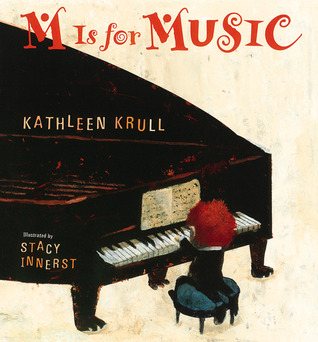 M is for Music by Kathleen Krull is a wonderful book! However, its style and illustrations by Stacy Innerst while funky aren’t as literal as I had hoped. This isn’t an issue for older children at all, though. And I really enjoyed the book too. But the nuanced illustrations were just too hard for a toddler to make the connections. My son still liked many of the pages. Especially the G is for guitar one. I would use this book for teaching about music more so than as an alphabet book teaching letters. 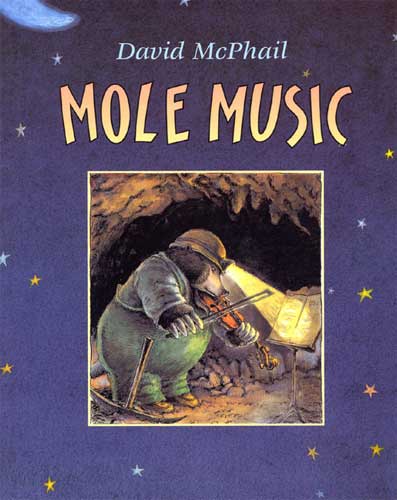 by David McPhail is a beautiful book about the power of music, trying hard, and not giving up on your dreams.  The story is about a mole who sees a violin on TV one day and decides to get his own and play. He is terrible at first but sticks with it. His music becomes beautiful, and over the years he thinks only he can hear and enjoy it. In reality, his music is nourishing a grand tree above the ground that serves roles in great things including as a mediator in a battle where both sides end up coming to a peaceful agreement instead of warfare.

Now yes I think that one little mole’s music ending a war is a rather large statement. But if you break it down, music and the arts are vital activities in our lives. It does transform people’s lives the way they transformed Mole’s.  My favorite part is in one illustration Mole is playing and in another tunnel, you can see his old TV discarded and tipped over, I like that message. 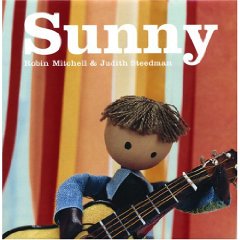 by Robin Mitchell and Judith Steedman is a great book about finding sounds all around and making music with anything and everything you find. Sunny hears music from the animals around town, the vehicles, and of course his friends playing at the playground. My son loved it when they had a “Hootenanny” and everyone makes music in their own way. This book reminded me of the Broadway show “Stomp” from the 90s. It is a great lesson for kids about how accessible making music really is. 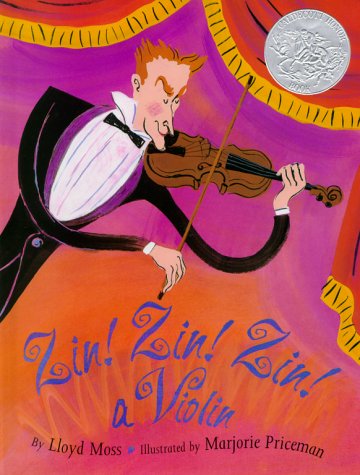 Zin! Zin! Zin! A Violin by Lloyd Moss is a big hit at our house and if you have a child into music or musical instruments this is a great book. You count the instruments as they come on stage for a performance and not only is this a great counting book, but it introduces musical instruments with its rhyming text and super fun pictures. I am biased though my little man is really really into instruments and loves this book. The day we bought it I had to sit in the backseat with him on the way home from the bookstore because he couldn’t wait to read it. 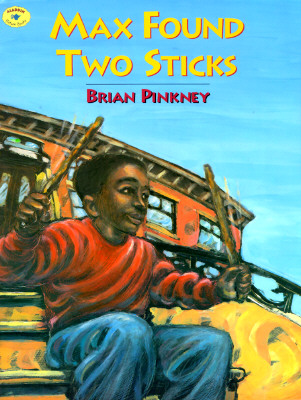 Max Found Two Sticks by Brian Pinkney is a great book for any kid that likes to drums or stick, or drumsticks. So that pretty much means all kids. Max isn’t a talker but he can express all sorts of things by thumping and banging the sticks he finds on different things. I like how he imitates the changing sounds in his environment and my son loved the marching band. Great tool for teaching sounds, music, and self-expression. 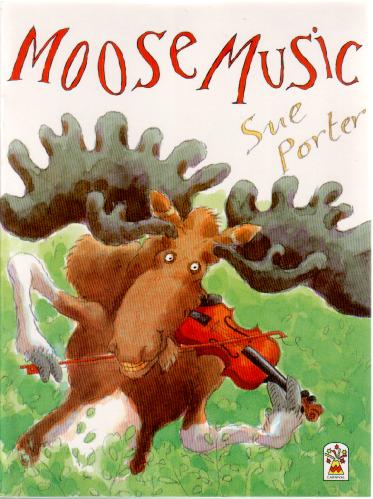 by Sue Porter is a goofy book about how what might sound like a racket to you, may indeed be music to other ears. Moose finds a violin in the mid and picks it up, and plays it. The sound is not music to the animals and people in the forest. They get angry, they threaten to chase him, and he doesn’t stick around. He doesn’t stop playing though he plays with all his heart and finally someone appreciates it. My son thought this book was hilarious. It’s a cute lesson about following your heart even in the face of adversity. 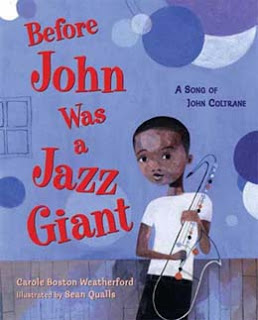 Before John Was a Jazz Giant: A Song of John Coltrane

by Carol Boston Weatherford is a fascinating book for my son who discovered “Johnny Coltrane” on YouTube while asking me about saxophones a year ago. What I like about this book is that it allows young children to relate to someone so inaccessible, and untouchable like John Coltrane. My son immediately grabbed onto the idea that is explained in the book that all the sounds and music Coltrane heard as a child turned into the music he played later on. Later that day we got into a deep and very long-winded “Is that music Mama?” conversation and I wasn’t always sure what to say. I wasn’t expecting to get stumped by his questions so soon. Either way when a book sparks questions like that it’s a keeper! 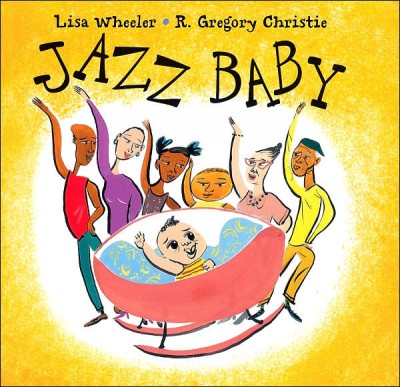 by Lisa Wheeler had my son clapping and be-bopping in his jammies before bed. This book is so fun to read, the musical words are impossible not to dance to. My son loves jazz, and his only disappointment was that there were no trumpets in the book. He didn’t understand that the family in the book, which included grandparents, aunts, uncles, and cousins were listening to a record. I tried to tell him it was like a cd. But the illustration was clearly a record player and he wasn’t buying it. Still, we loved this book! The family was loving and I loved that the older brother was holding the baby. This isn’t common in kids’ books to see a boy holding a baby. Great book even without a trumpet.

For more quick tips on helping your child learn to read check out my book; Raising A Rock-Star Reader. It is packed with fun ideas for families, book lists, and advice for parents.

Next Post: Fun Things To Do With Kids { Add Yours!}
Previous Post: Sort The Mail – Math Activity For Kids