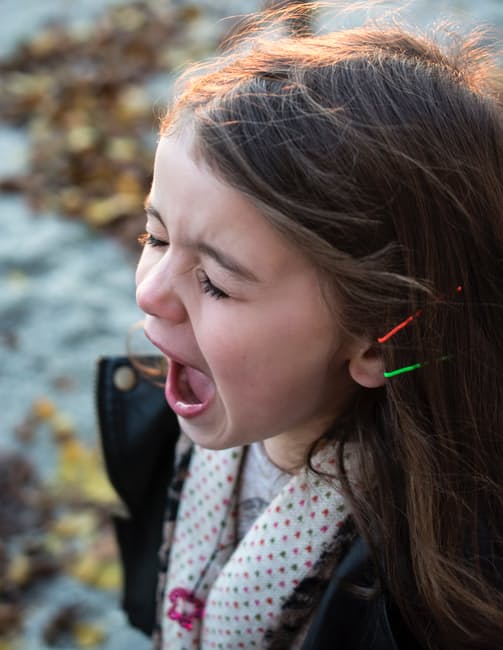 Today, Amanda Morgan, MS, author of Not Just Cute, teacher, speaker, trainer, and mom is sharing with us why traditional time-outs don’t work and what to do instead.  If you are familiar with No Time For Flash Cards Facebook page you may already be familiar with her writing about developmentally appropriate practice and positive parenting, as I often share her insightful and research based articles about child development.

It’s a familiar scene. A child misbehaves and is sent to time-out.

A. screams, flails, cries, and/or hyperventilates.

B. runs, laughing, from the time-out spot, only to be chased down and returned. Repeat ad nauseum.

C. sits calmly and pensively until the time-out clock expires, at which time he/she receives an amazing and life-altering realization which forever changes the child’s behavior.

I’ll tell you what I usually hear from people. A and B. Over and over.

“I’ve tried everything, including time-outs, and nothing works. It’s awful.”

“I feel horrible when I put my kids in time-out. Things just go from bad to worse.”

It’s true. 50 years ago, when time-outs were first introduced as a parenting tool to replace corporeal punishment, it was a tremendous step in the right direction. Unfortunately, the tool has become a crutch, and is often misused by parents and teachers alike. Without the proper implementation, time-outs serve no one, leaving parents, teachers, and children frustrated and trapped in unhealthy patterns of behavior.

But they can be used effectively. As long as one recognizes a few key perspectives. Here are two:

Key Perspective #1: Discipline is not about your control over a child, but about supporting a child in building self-control.

This is a huge paradigm shift for many people. As parents and teachers, we often feel judged based on how well we can “control our kids”. But the reality of child development is that the adult-child dyad is not intended for the adult to exert control, but to teach self-control. This doesn’t mean they are equals. The parent-child or teacher-child roles must remain defined and separate in order to remain healthy. But it does mean that we look at a longer range picture. Our goal is not to get through the here and now by exerting our dominance and control, but to plan and work from the here and now toward the future by helping children to recognize, develop, and exert self control.

As they grow in independence– into teenagers and then adults –their happiness, success, and overall health will depend very little on our control over them and very much on their control over self. The 18 or so years they spend dependent upon us is intended to be a developmental period where they are able to grow in degrees to become sufficiently prepared to be independent adults. We can not assume that we can exert our control on them for 18 years, and then turn them over to their own devices and expect to see good results. It should be a process of incremental degrees, as we scaffold their growth.

If we want children to be capable and motivated to make good choices on their own, not just as they become adults, but in those simple, but often critical moments when we just aren’t there to watch, we have to emphasize building self-control over adult enforced control.

When we use time-out as a punishment, shame is often its currency. The message to the child, whether vocalized or not, is “you are bad, and bad children sit here.” It’s the modern-day equivalent of a dunce cap. Better than corporeal punishment? Absolutely, but based on what we know about child development and the brain, it’s certainly not the best route. Shame is not an effective teacher. In fact, some scientists assert that the brain’s response to the emotional pain of shame is actually very similar to the brain’s response to the physical pain of abuse. Putting a child in time-out merely to communicate our displeasure and administer shame as a deterrent is not healthy or effective for teaching appropriate behavior.

When used as a tool, however, a time-out can be an effective way to coach a child through the process of emotional self-control and improved behavior. So what makes the difference?

Effective Time-Outs are for Coaching 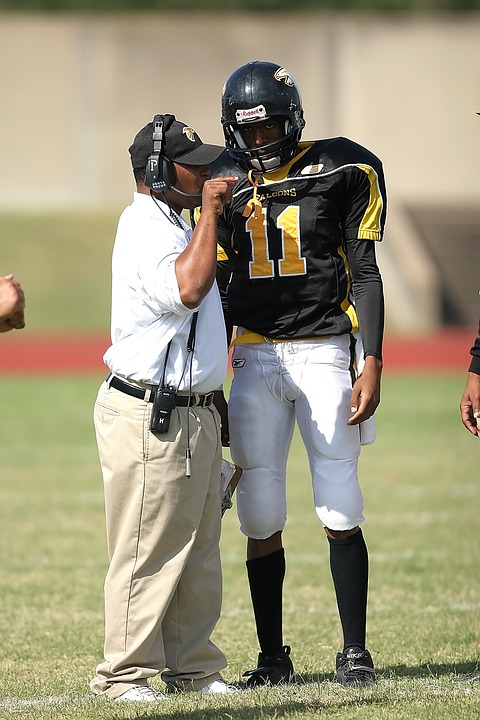 The quickest way I know to communicate how to implement an effective time-out is to pull directly from the world of sports. Imagine your favorite team. Football, basketball — whatever works for you, as long as they have time-outs!

So, imagine you’re watching your favorite team in a very important game, and they are just not pulling it together. Errors, miscommunications, poor executions, you name it. Thankfully, the coach finally calls a time-out.

…you watch as the coach simply sits all the players down on the bench, tells them they weren’t playing very well, and then grabs a snack while the time-out clock runs down. Once the time is up, the coach tells the team, “You need to stop what you were doing before, OK? Now, go get ’em!” and sends them back into the game.

But that’s essentially the same pattern many parents and teachers use when they use time-out as a punishment rather than as a tool.

Now imagine those infamous, powerhouse coaches. What do they do when their teams start to fall apart?

They call a time-out to take their players out of an overly charged situation and give them a chance to take a breath and refocus. They give specific instructions about what they should do next. Then, often with a team cheer before they break, they send them back out to the game. Calm. Refocused. Clear about the plan. Encouraged.

When we call for a time-out with children, whether at home or in the classroom, it’s actually rather similar. We can’t just sit them down with a timer and expect them to magically gain the skills or understanding they didn’t have 5 minutes earlier. We have to coach.

The first step of the time-out is to give them a chance to step out of a charged situation, calm down, and refocus. This may happen quickly, or take quite a bit of time. That depends on the child and the situation. Luckily, you don’t actually have a time-out clock for this. Respond individually (some kids need you close, others need their space) and help the child regain calm. Only then is it time to teach.

We have to be specific and clear as we socially coach children. If we don’t say what we need to see, children will have a difficult time making that conceptual leap on their own. In general, we need to verbalize the thought process we hope the child would follow. It sounds like a long process, and you will often feel like you are stating the obvious. But obvious to an adult is not always obvious to a child. Just like running basic drills in a sport, this coaching helps that internal process of self-control to become more natural. 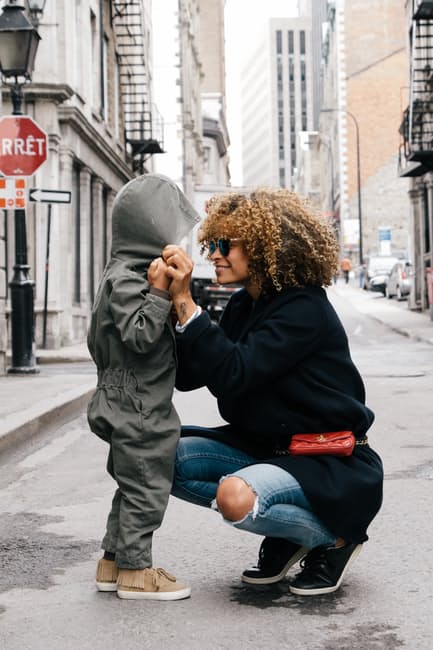 Describe what happened, and label feelings involved. “Beth, I see you’re throwing that playdough. I know you’re excited, but we can’t throw the playdough.”

If necessary, help the child make restitution. “Ok Beth, let’s get this playdough picked up and back onto the table where it belongs.”

Remind again about that better choice. “Remember to keep the playdough on the table this time.”

Return the child to play. Believe she can succeed. Be there to support.

Coaches are given more than one time-out per game. Similarly, when a child stumbles again socially you might need to call another time-out again and repeat the process. Very young children usually need multiple learning opportunities to create independent skills. However, just as a coach will eventually make adjustments to help his team run more smoothly, you may need to redirect if problems continue. (“Beth, we’ve talked twice about keeping the playdough on the table and you are still choosing to throw it. It looks like you’re going to need to find another area to play in for a while. Let’s go build something with the blocks.”)

This social coaching process uses those two key perspectives we talked about earlier, coaching a child through self-control rather than punishing them by getting them to bend to our own control. When children begin to see these time-outs for what they are, they are less likely to go with Option A: melt-down (a common response to shame) or Option B: run away (a common response to uncomfortable control). (Option C doesn’t exist in our developmental reality, but I’d love to hear about it if it does in yours.) When we use time-outs for coaching, we are able to get Option D: the child gets help to calm down, refocus, understand boundaries, and make better choices. In sum, the child gets positive guidance. 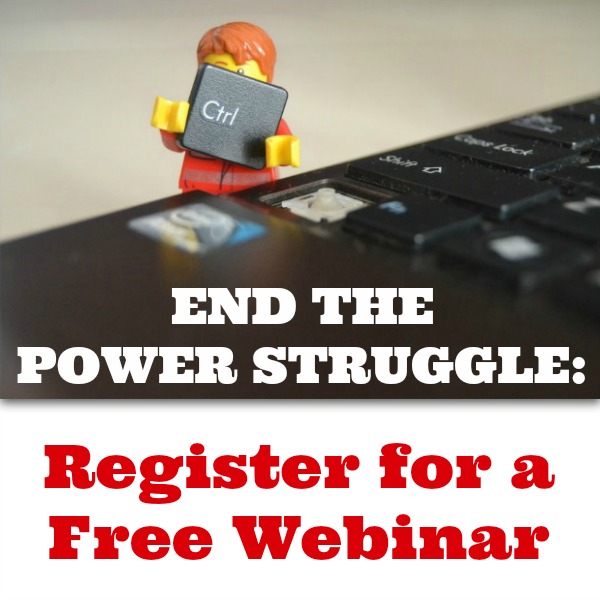 I’m teaching more about the principles of positive guidance, including my #1 most-used tool for ending power struggles, in a free webinar on Thursday, January 12. I’d love to have you join me. Whether your biggest frustration circles around getting kids to transition from one activity to another (bedtime battles, anyone?), get along with one another, or simply not make you lose your mind, odds are it all boils down to power struggles. Join me to learn how a few simple steps can turn a war of wills into a win-win situation for you both. Sign up here.

Amanda Morgan, MS, is a writer, speaker, trainer, and creator of the blog, Not Just Cute, where she focuses on intentional, whole child development. She and her husband have four boys and spend their free time chasing them around the Pacific Northwest. 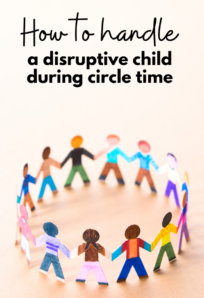 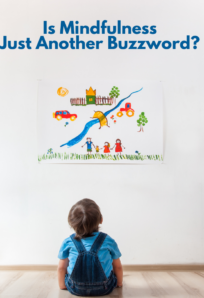 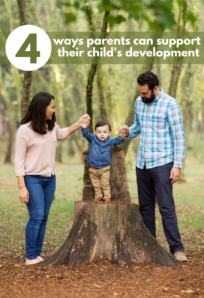 Next Post: Snowflake Crafts For 2 and 3 Year Olds
Previous Post: Winter Circle Time Activity and Craft for The Hat by Jan Brett with FREE PRINTABLES