There is no Letter of the Week today . I am still on vacation so I have a treat for you. Today our special guest Amy from Teachmama has graciously allowed me to scour her blog for a post that I think would be perfect for my readers. She originally wrote this in the spring but I think so many of you could benefit not just from this game but from her whole awesome blog! Regular old me and my mini Picasso return tomorrow ! 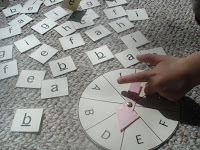 We had rain, rain, rain once again, which will hopefully mean that the flowers will be more beautiful than ever here in Maryland. Maybe? I can hardly wait for some outside color-matching activities. . .
Anyway, today was a pretty good afternoon for indoor games.

Once Cora went down for her nap, I let Maddy and Owen choose which game they wanted to play before their rest times–Alphabet Egg Puzzles, Rhyme Bingo, Rhyme Sorts, or Alphabet Spin. Owen choose good ole Alphabet Spin. I don’t think I’ve mentioned it here before, so here’s what it is:

The tricky part is when you get to the end of the game, since most cards have been taken, since the winner is the person with the most cards in the end.

I love that this game includes only half of the alphabet, especially because little ones usually confuse b/d and p/q. I also love that i/j are separated and that Alphabet Spin I & II each have half of the alphabet.
With this game, we do a lot of comparing–when someone gets a B or a D, someone locates a lowercase b and d and holds them next to each other so the person can choose more easily, and we always help each other out if need be. It seems to be just enough of a challenge and not too, too overwhelming for them.

That’s it–that’s our little bit of learning for the day. Now, rain, rain, go away. 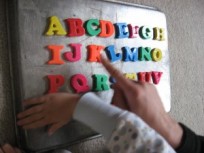 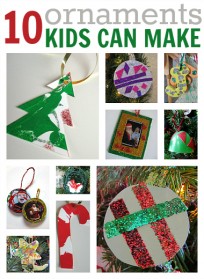