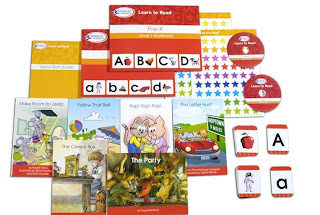 When I was asked by Hooked on Phonics to be a part of a group of parent bloggers to have what Judy Harris the CEO of Hooked on Phonics parent company Smarterville dubbed “Virtual Coffee” I was thrilled. It’s obvious I am not a fan of static learning , workbooks or flash cards. So I was thrilled to be a part of a group suggesting appropriate activities, what we like and don’t like about a developing product and what we want to see as parents and educators .

I have to start off by saying when I opened the package I knew there would be flash cards included and had to giggle when my son only wanted to play with them. He’s never seen flash cards and I had a good laugh that I’d be reviewing something that included them on my blog that is devoted to learning with out them. So I am going to address this before I get into the nitty gritty. I don’t think flash cards are inherently evil, I just don’t think they are the best way to learn, they get results but the results are usually pretty shallow, they are memorized not understood and often used in such a static way that children are missing out on learning to the depth that they need, and in a way that they will make true connections, which in my opinion is through play and discovery. This picture is one of my son matching up rhyming words like cat and hat, spoon and moon and tree and bee! 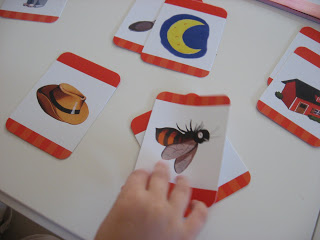 That said sometimes flash cards are appropriate and the way that this system uses flash cards is in a dynamic and engaging way. They are used in games , kids are not sitting down and being flashed a letter with the expectation to label it and move on to the next. They are used for matching, for rhyming and as a tool for learning not memorizing. This made me very happy to see, and my child much like the vegetarian’s child who naturally gravitates to steak was happy I didn’t banish them, he loves them!

The system itself is set up for parents to use the workbook as a guide not as worksheets, when you open a lesson you are met with all different ways to introduce , reinforce and play with the letters. During our “virtual coffee” with Hooked on Phonics many of the parent bloggers as well as I suggested they include more sensory and kinetic activities for the lessons. 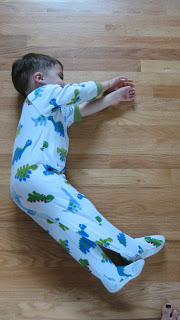 They listened! Here you see my son making a C on the floor with his body. Not only did he love doing this , for days he was asking me to make all sorts of letters with his body. This simple activity sparked his interest and was a launchpad for even more learning!

There isn’t just one option for each letter either, here you can see three o the many for the letter B our button B 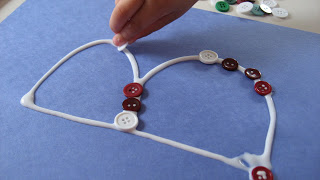 ( which used fine motor skills to do) as well as one we made on the floor with bean bags ( which used gross motor), 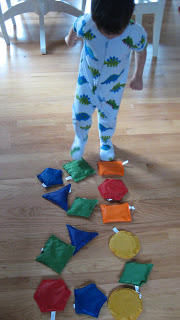 and tracing the letter with your finger to learn the shape. 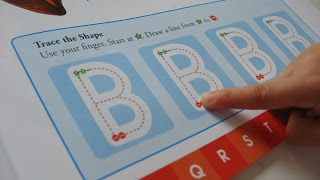 I suggest parents pick and choose which things will work best for their child, and the beauty of this system and how easy it is , is that there are so many options you can tailor it without any added effort.

Other than the workbook you also get story books and a DVD. My son has loved every book and don’t even get me started about the DVD. He is oddly attached to it. I have to admit I am absolutely impressed as well, the production quality is much higher than I expected, the songs are awesome and the concepts used for it like a art museum guard finding letters in various masterpieces is right up my alley! I enjoy watching it as well which is important since this should be a family affair, I can support my son’s learning much better if I am a participant as well. Thankfully it’s so well done, I enjoy watching with him, talking about it as we do and don’t groan when he asks for it again a few days later! The other thing that seems small at first but is really very important are the star stickers that are used as a way not only to celebrate finishing a lesson but also as a reminder for your child that they can do it. My son loves choosing which color star to pick out at the end of each lesson. 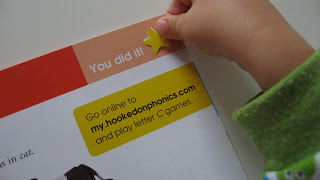 We’ve been doing the system now for a few weeks and it’s shocking what he’s learned, his phonemic awareness has greatly improved and what’s delighted me the most has been his rhyming skills and seeing them develop. I wasn’t expecting to start teaching rhyming for a while but did a few lessons with him thinking they’d go over his head – they didn’t and we’ve been rhyming ever since!

Over all I am genuinely impressed, both with how the lessons are presented and the results I have seen in my own child. I have to admit before being contacted by the company to participate in the discussions about literacy and learning I was not planning on ever buying this product to use in my own home. I wouldn’t have discouraged a family from it, but I didn’t think it was right for my child. I was wrong. Turns out my child craves this more structured learning and with the short lessons – each is under 20 minutes or less, it still fits my personal belief that adult directed learning should be minimized for preschoolers.

Disclosure : The product reviewed was provided for me free of charge. I was not compensated in any other way for this review. I am not employed by Smarterville the parent company of Hooked on Phonics, nor was I paid for my involvement in the discussions during the production of this product. These opinions are my personal opinions only.
Like this post? Share it with a friend! 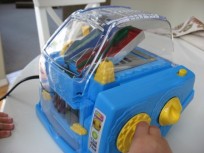 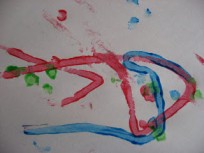