Today’s post is written by Melodie from Breastfeeding Moms Unite 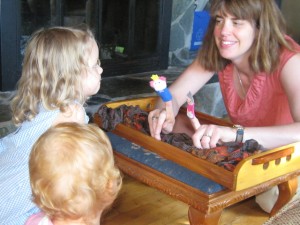 I’m so excited to do a guest post for Allie at No Time For Flash Cards. While I run a Licensed Family Daycare and do lots of crafts, many of which I get from Allie’s blog, my own blog Breastfeeding Moms Unite! is mainly about breastfeeding so I have never posted a story or craft project before. This has been a really fun project for me and my daughters, so a big thank you to Allie for this opportunity.

I love using puppets to act out a story. And I love how mesmerized children become while listening to puppets. They are great tools for getting children to listen intently and interact.

I have adapted the following story from a story by Carolina Sherwin Bailey. You can change up the characters to suit the types of puppets you have. For instance, we have a number of animal puppets we like to use sometimes. Alternatively, if you don’t have any puppets you and your child can act out the story together. This also makes a great story on its own.

To do this story as a puppet play you will need the following: four puppets (a boy/girl, mother/father, neighbour/friend and a wise old woman), an apple, a knife (a dull one is safer and works fine for cutting the apple), and a tree branch. I also like using scarfs to make a landscape, and leaves since it is an Autumn story, but these are not necessary.

The Little House with No Windows and No Doors and A Star Inside.

Once upon a time there was a boy who was tired of playing with his toys and wanted something new to do.

So he asked his mother, “What should I do?”

His mother thought and thought. Finally she told him, “Go and find me a little red and green house [use the same colours as your apple] with no windows or doors and a star inside.”

This really made the boy wonder. His mother usually had good ideas but this one sounded very strange.

“Which way shall I go?” he asked. “I don’t know where to find a red and green house with no windows and no doors and a star inside.”

“Go down the lane, past the farmer’s house and over the hill,” she said. “And then hurry back and tell me all about your journey.”

So the boy put on his jacket and went outside. It was a lovely Fall day and the leaves were starting to change colour and float down to the ground [children may blow around the leaves if you have any].

He hadn’t gone very far up the lane when he saw his neighbour who was working in his yard.

“Hello neighbour!” called the boy. “Do you know where I could find a little red and green house with no windows and no doors and a star inside?”

Well, that’s a mighty strange thing to be looking for!” the neighbour chuckled.

“Why don’t you walk up the lane, past the farmer’s house and ask the old lady who lives at the top of the hill. She’s a very wise woman. I bet she would know.”

So the little boy set off up the road. Soon he came to the house and he knocked on the door. [Knock knoock knock!]

The wise woman answered the door and smiled sweetly at the boy.

“Hello,” answered the boy. “Do you know where I could find a red and green house with no windows and no doors and a star inside?” he asked. “My mother wants me to find her one and bring it to her.”

“Oh my!” said the wise woman, the lines in her face crinkling with joy. “I would like to find such a house myself. It would be so warm when the frosty nights came. You should go to the orchard and ask the wind. The wind listens at all the chimneys and knows many secrets. I think the wind could tell you. Now off you go!” she said shooing him out the door with a smile.

“Grown ups sure are strange sometimes,” thought the boy. But being a good listener and wanting to please his mother, he went to the orchard.

When he got there he stopped and sat underneath a tree. “Wind,” he called,”could you please tell me where I can find a red and green house with no windows and no doors and a star inside?” [Have children blow like the wind and rustle the tree branch]

He listened for a reply but heard nothing. But then the wind started to blow.

It blew through his hair and through the leaves and suddenly an apple dropped from the tree and fell right into his lap! It was red and green and he could see a little worm inside it.

“Why, this apple is the worm’s house!” he thought. “And it is red and green and there are no doors and no windows!” He lept to his feet. “I think this is what my mother wanted me to find!”

He ran home as fas as he could.

When he got inside he cried, “Mother! I found a red and green house with no windows and no doors, but what about the star inside?”

His mother took the apple from him  and smiled. “Watch,” she told him, and she cut that apple in half width-ways and showed him.

“There’s the star inside!” said the boy. “I think it is too pretty not to look at before we eat the apple, don’t you think mother?”

“Yes, indeed,” replied his mother, and they sat down at the table and shared the apple.

It is a nice treat to sit down and eat your apple with your child, but you can also make apple prints with your apple halves.

What you will need: red and green paint, white paper, a shallow dish, apple halves.

Squirt some paint into the dish and press an apple half into each paint blob. Swirl it around a bit to cover the whole apple.

Press the painted apple onto the paper.

It’s okay if the colours mix a little. It’s all about experimenting and having fun.

What kinds of stories do you know about fruits or vegetables that you could do a print craft with afterwards? 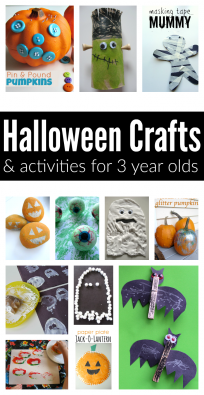 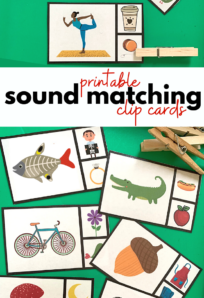